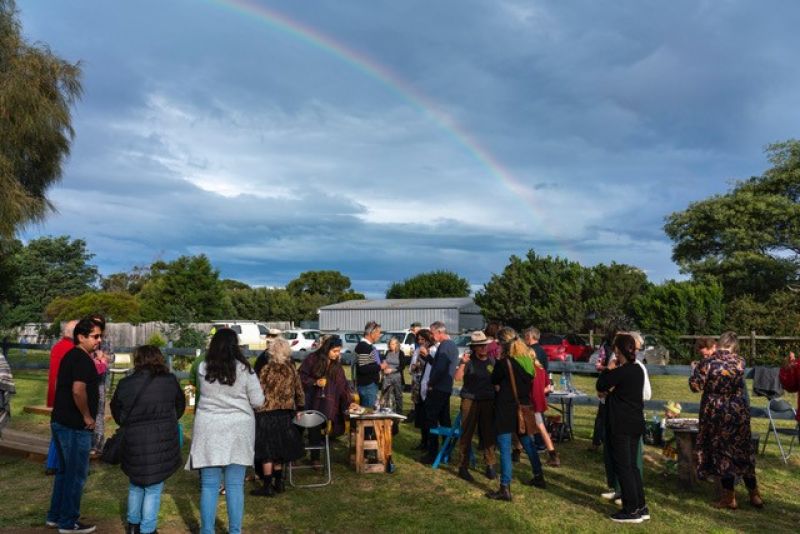 Healthy Tasmania and Relationships Australia Tasmania have worked together since 2018 to support Neighbour Day, a national campaign celebrated annually in March, encouraging people to build social connections with their neighbours. The Healthy Tasmania Neighbour Day Challenge 2021 encouraged organisations and individuals to apply for up to $1000 to fund their neighbourly initiative to combat loneliness in their community.

A Moment of Tea

For Neighbour Day this year, A Moment of Tea held four free events throughout May in Sandy Bay – two tea parties and two tea meditations. A Moment of Tea set up tea experiences for people to immerse themselves in the moment of joy, peace and deep relaxation. Once people are relaxed, communication becomes easier and people can then interact with each other, nature and themselves. A Moment of Tea received lots of great feedback from participants, and they will now facilitate one free session every month. 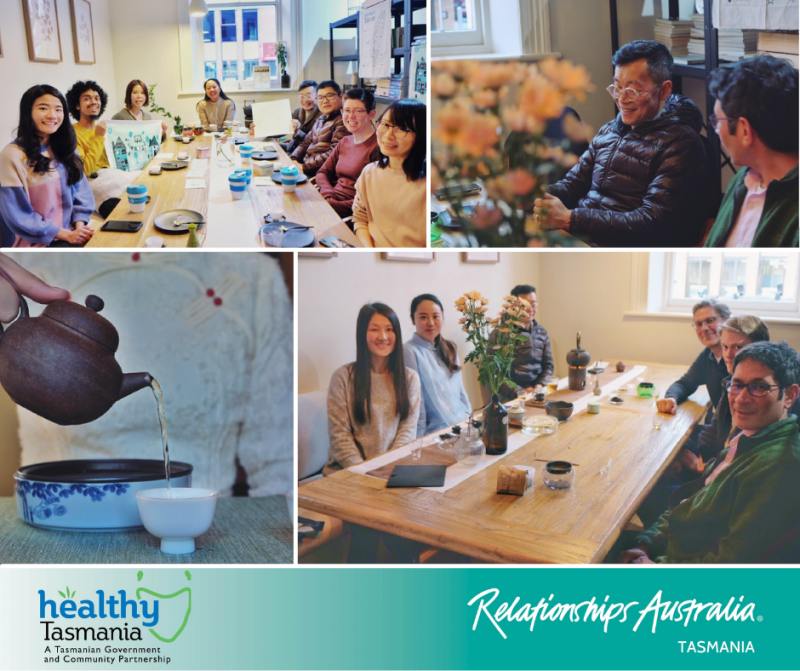 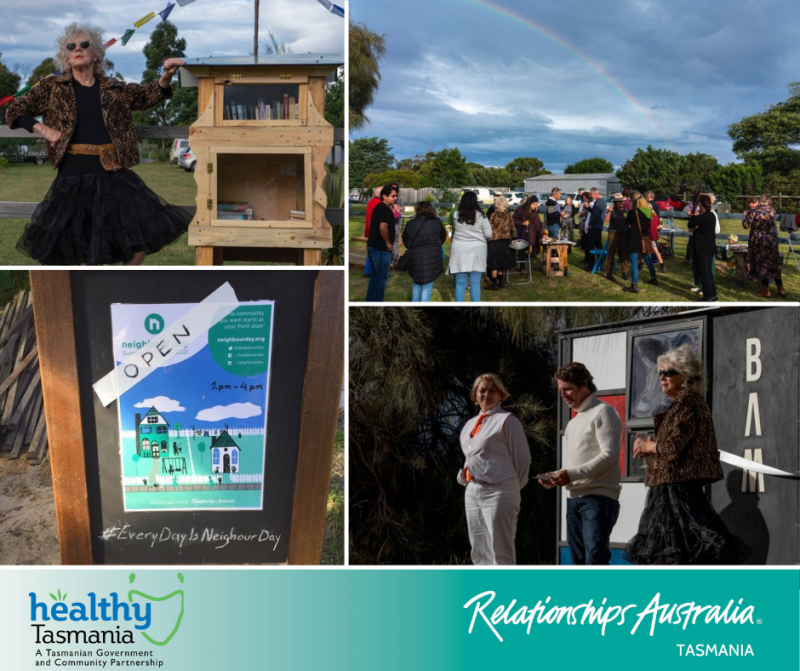 Clarence Climate Action supports the local community by working towards a sustainable future with positive actions. Clarence Climate Action used their Neighbour Day grant to educate their members on Tasmanian Aboriginal culture – brought to them by NITA Education in June. The group learned about the history of Tasmanian Aboriginal people and bush foods and medicines. “Everyone left feeling excited about having learned more of our Indigenous history, more about our native plants and more about treading lightly and sustainably on this ancient land.” 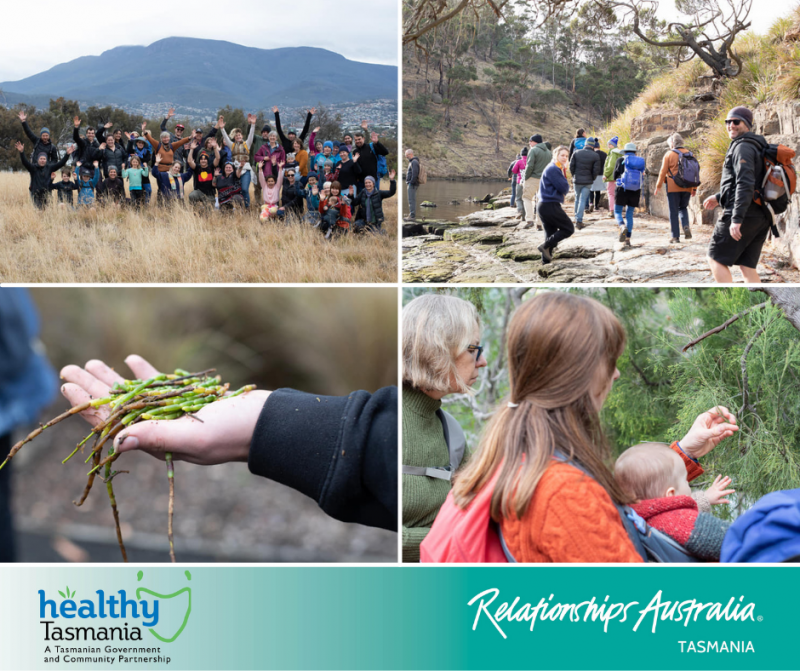 Chunxia (Vera) Zhong organised a gardening day for her neighbours in Warrane. Vera set up the plants, flowers and saplings, as well as Neighbour Day banners and promotional goodies for her neighbours. The community was delighted with this initiative, as people came to the event and chatted about the importance of Neighbour Day, the plants and their lives in the community. It was Vera’s first time engaging in an activity like this, and she’s keen to do more for her community. 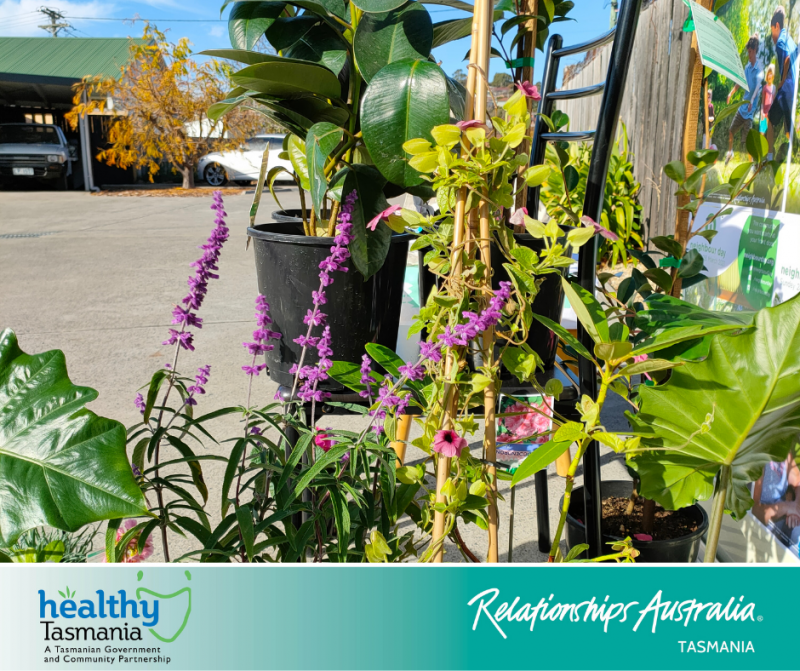 Emma Cazaly worked with members of the community to build two high quality, sturdy yet beautiful lending libraries in Lindisfarne and Lenah Valley. The lending libraries were created in May to allow people to connect and find joy while still maintaining social distancing. They aim to promote kindness among strangers and help build new relationships and neighbourhood connections. Emma has received a lot of positive feedback about the libraries. 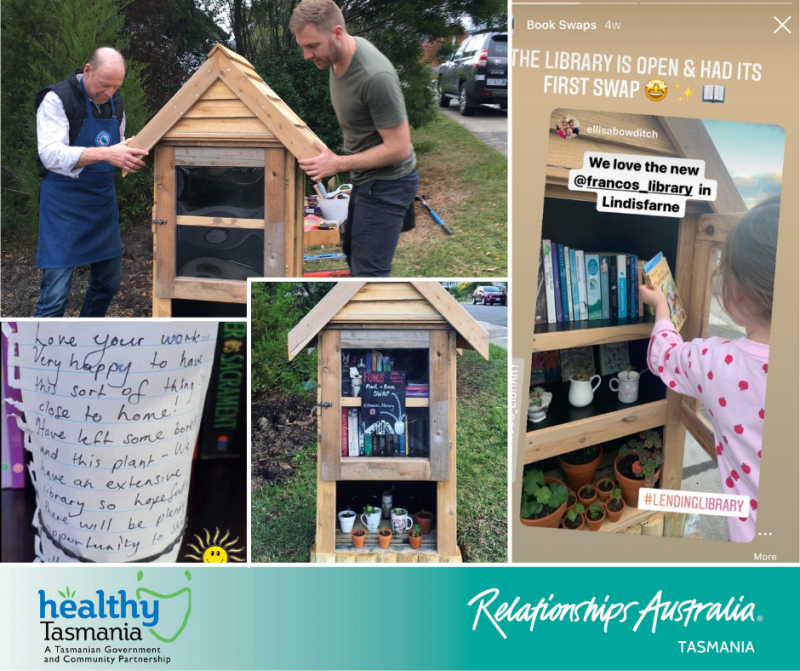 Katie Kristensen and her friend Bonnie set up a share station for their local neighbourhood in Howrah. Since launching in April, the supporting Facebook group has grown to over 100 members. Even during the less bountiful winter months, the share stand is heavily used. The community share lemons, pears, pumpkins, bay leaves, rosemary, lavender, books, and seedlings. The team then realised that they could share the love to another neighbourhood and made another share station in Warrane. The spring and summer bounty will be a great time for both of these neighbourhoods, thanks to Katie, Bonnie, and the spirit of Neighbour Day! 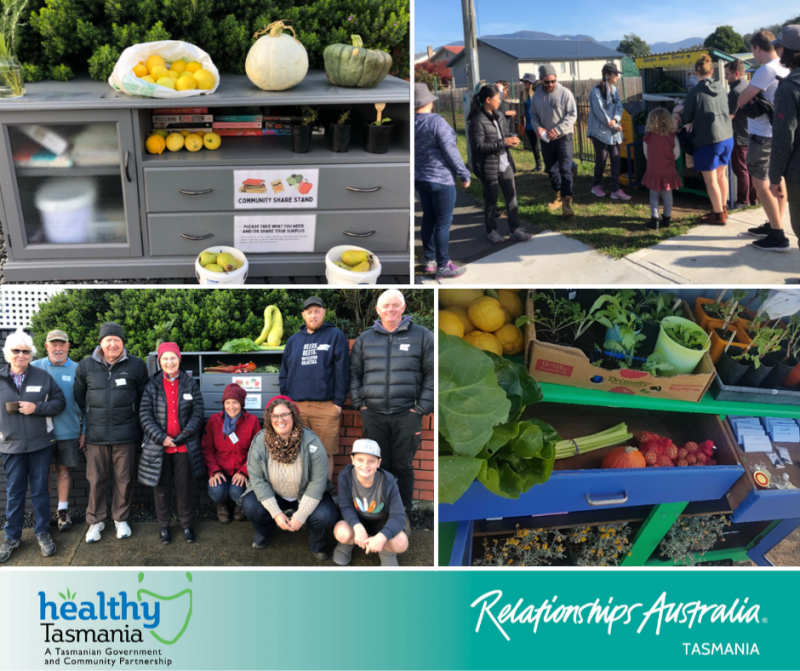 Families Tasmania used their Neighbour Day grant to provide keen Family Food Educators with IGA vouchers to buy seasonal foods and make some tasty Eat Well Tasmania recipes to share with their communities statewide. Through healthy food, these Educators helped cook up community connections. Building food skills and food connections is such a great way to bring communities together. 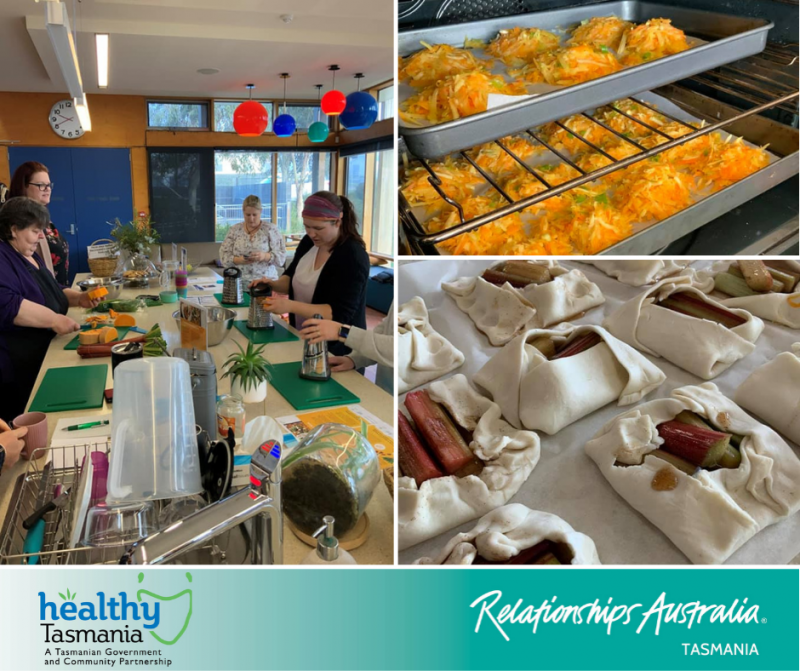 The Longford Free2BGirls group created postcards from artworks to give to local community members and businesses to prevent loneliness in their community. They shared their grant with the Campbell Town group, who did a bake sale where they spent time preparing baked goods and then shared them with the community. The girls really enjoyed connecting with their communities and are very keen to do it again!

The Friends of Kingston Heights community group started a monthly program called ‘Cuppa in the Cul-de-sac’, which brings residents together for morning tea across the various cul-de-sacs in this Kingston neighbourhood. As the local neighbourhood park is not very accessible to older residents, the community got together in a place that everyone can access – their cul-de-sac! This is a great opportunity for neighbours who didn’t know each other before to connect, which is exactly what Neighbour Day is all about. 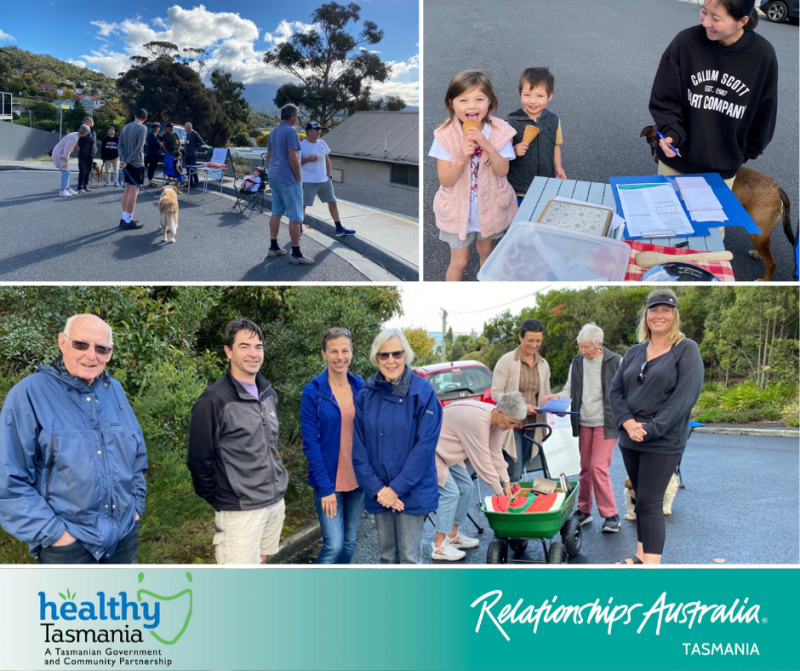 Glenorchy City Council celebrated Neighbour Day this year by providing a lunch for members of the Glenorchy community who need it most, with over 50 people involved on the day. GCC’s initiative: CommUNITY Kindness Connects Us is an ongoing project at Cosgrove High School which will be utilised again for Neighbour Day 2022.

The Golden Wattle Café in Glenorchy is for people living with dementia and their caregivers, as well as other older people who would like to interact with the community. They used their grant to run sessions where people can come and join in sing-a-longs, as music enhances the lives of those living with dementia. These sessions are enjoyed by all and they are a happy, joyous occasion. 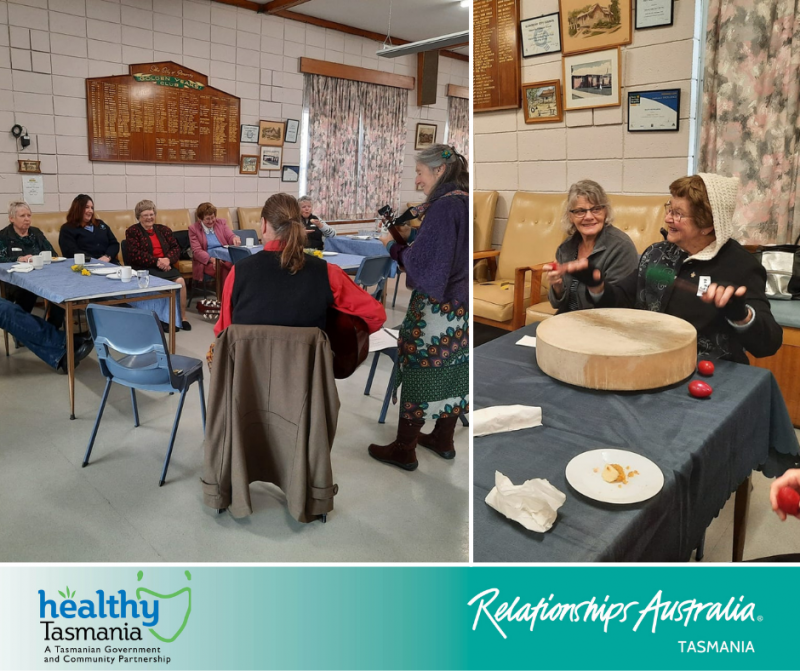 Hobart City Mission held a Clothes Swap event in May at their Moonah Op Shop. They did this to increase community engagement and awareness of the sustainability of op shopping. 50-60 people attended and over 1000 items of clothing were swapped, with lots of positivity and smiling faces. Many people commented on how great it was and asked City Mission Op Shops to run the event again, which they are now considering for 2022. 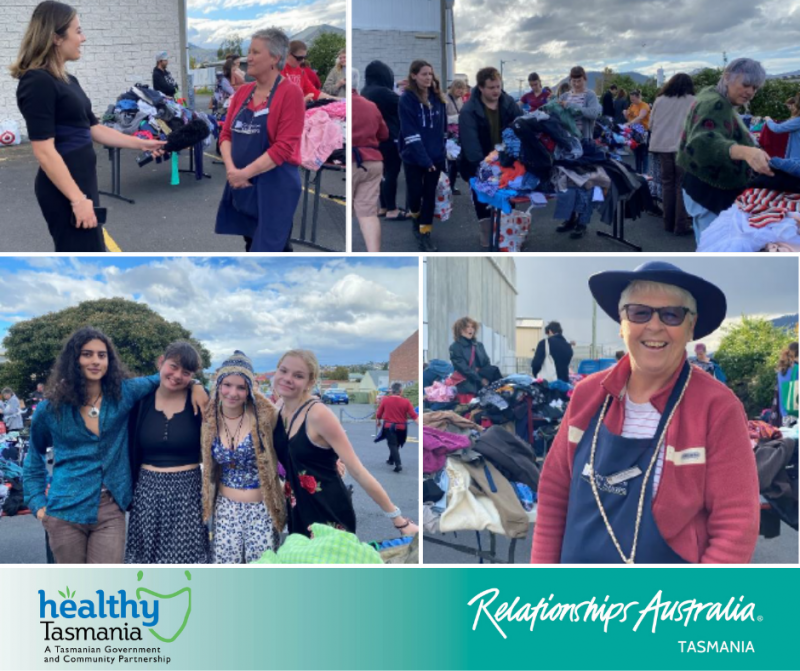 The Live Well Die Well Mini-Expo on 28 March brought the Waratah-Wynyard community together to connect and learn about living well across all stages of life. The expo, held by Live Well Tasmania (LWT) in partnership with the Waratah-Wynyard Palliative Care Group, showcased a range of services and support. Neighbour Day featured at the expo as part of LWT’s passion for social connection and the positive impact it has on people’s health. 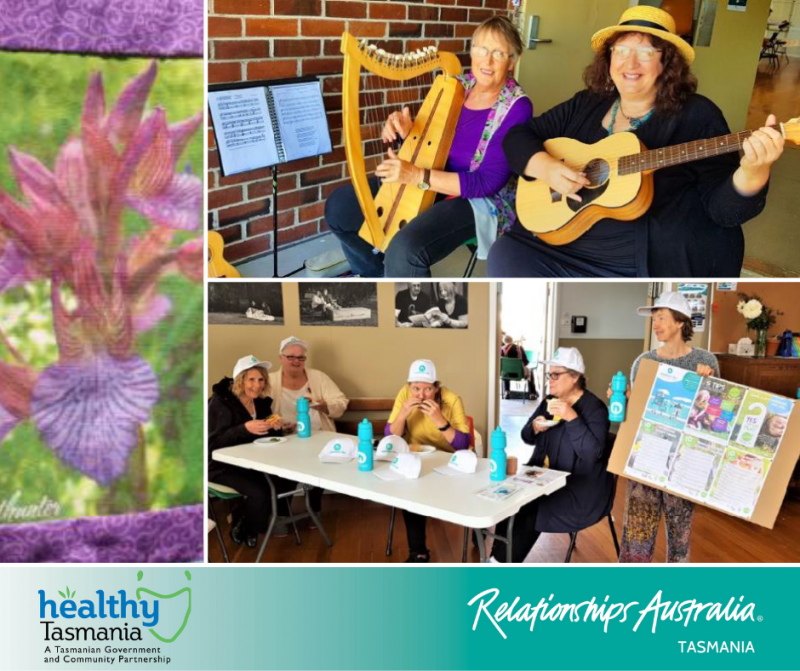 Building on their 2020 Neighbour Day grant, where they completed a mural on the outside of the hall and held mural workshops, Lower Barrington Hall further upgraded the hall facilities for the community. They replaced old equipment to make the hall more accessible for older people and people with a disability and updated the badminton equipment for the badminton club that has used the hall for over 40 years. They have received lots of very positive feedback about the upgrades to the hall, and it has made it easier for the Lower Barrington community to connect with each other. 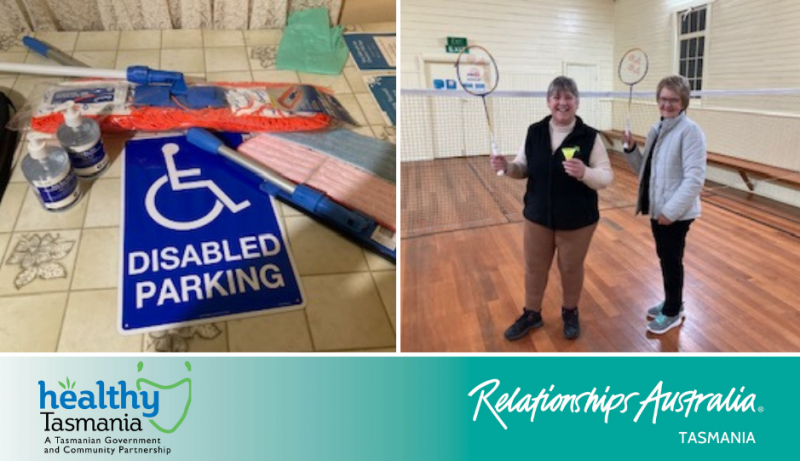 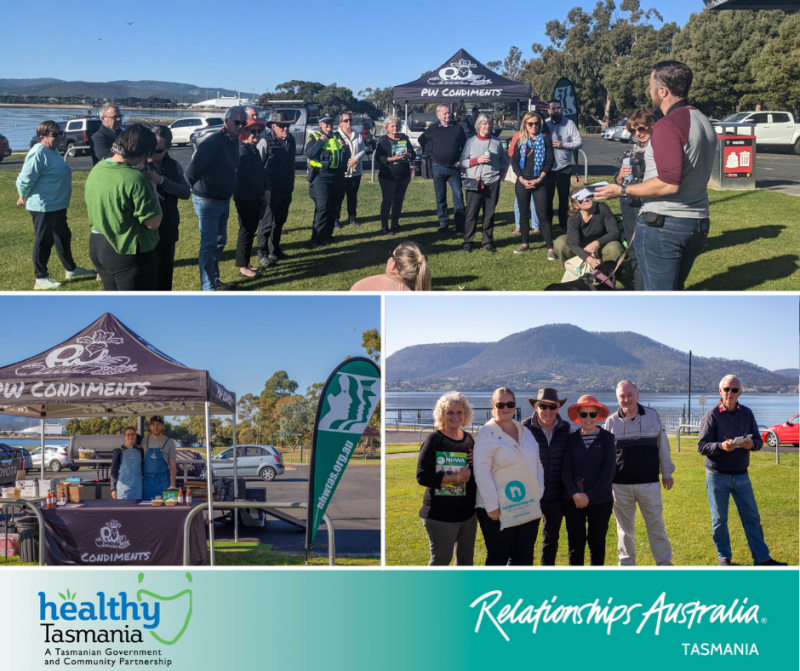 Oatlands Community Association held a Christmas themed meal for the Southern Midlands community on 25 May. Everyone had a great time – there was laughter, incessant chatter and friendships rekindled, all with Christmas carols playing in the background. Oatlands Community Association are continuing their meal initiative by holding themed lunches for the community through the funding they secured through the Healthy Tasmania Fund. 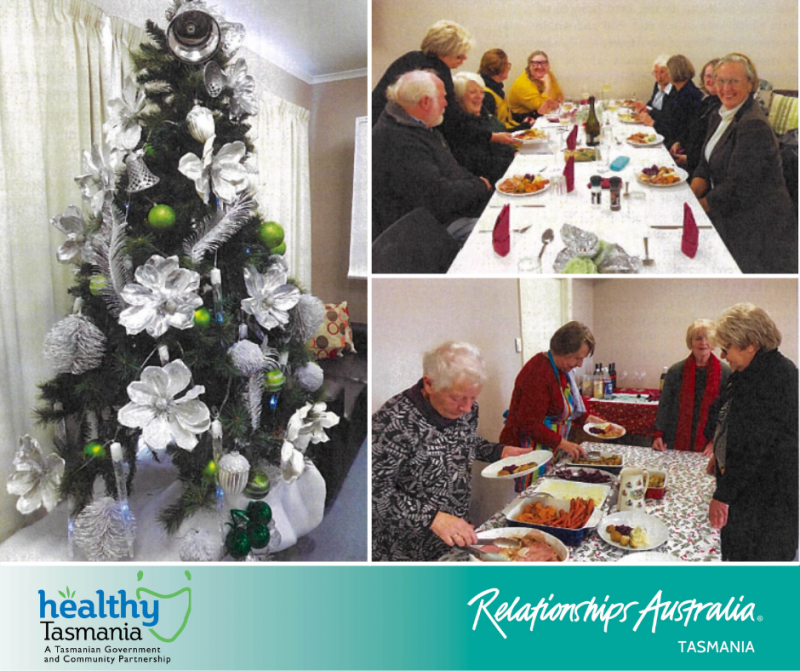 The Salvation Army held a Neighbour Day celebration on 28 March for the Glenorchy community. Neighbour packs were given out and will help encourage people to talk with their neighbours. Everyone welcomed the free coffee and hot chocolates and community BBQ. The Salvation Army made it a light, fun day that brought smiles to peoples’ faces. 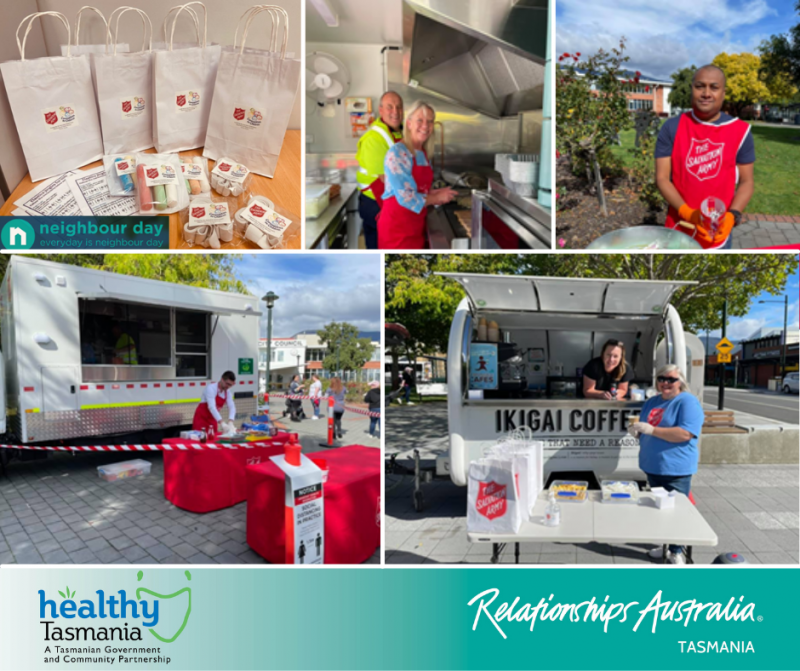 St Virgil’s Old Scholars Football Club (SVOSFC) in New Town held a club event in April to celebrate Neighbour Day, where they discussed the new women’s team. The emphasis of the evening was on unity, togetherness, and social connection: three teams, one club. SVOSFC displayed their commitment to Neighbour Day values by showing how sporting clubs are places where very strong connections can be made and kept. How exciting that this will be the first season for the SVOSFC women’s team – Go Saints! 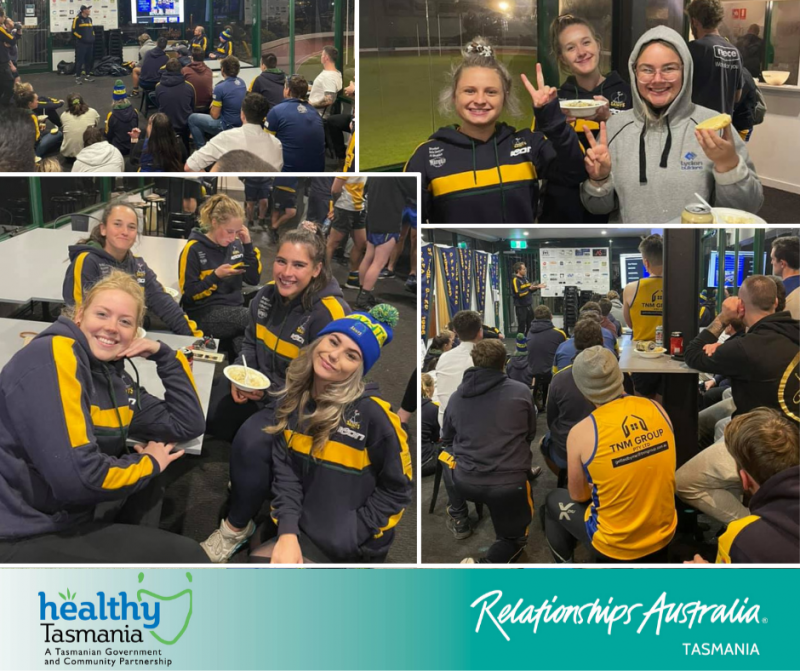 The local community of Sulphur Creek constructed a beautiful community garden and held an event to launch the garden in June. Many people who came started as strangers and left intending to see each other again! Many young families got involved, bringing older and younger community members together. The garden, filled with fruits and vegetables, meant people ate potatoes with fresh herbs and apple crumble on the day. The community garden will hold more gatherings for the local community in the future. 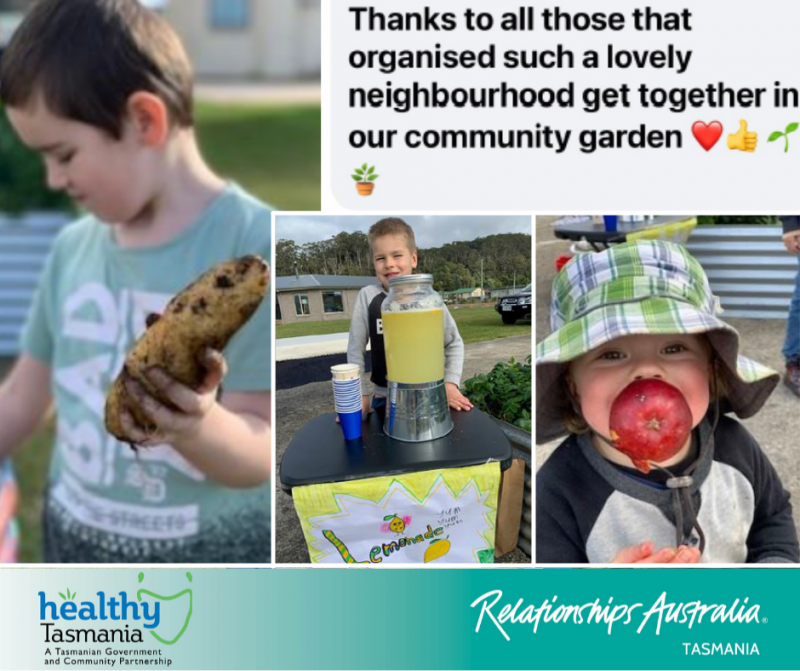 Taroona Community Association (TCA) held a ‘Bush Picnic’ on 2 May, where their Track Down Taroona map and biodiversity poster was officially launched. The day included a birdwatching walk, scavenger hunts and morning tea. Great weather on the day drew 150 people to the lively outdoor event. The TCA will use their grant funds to build a natural bird bath in Rotary Park. 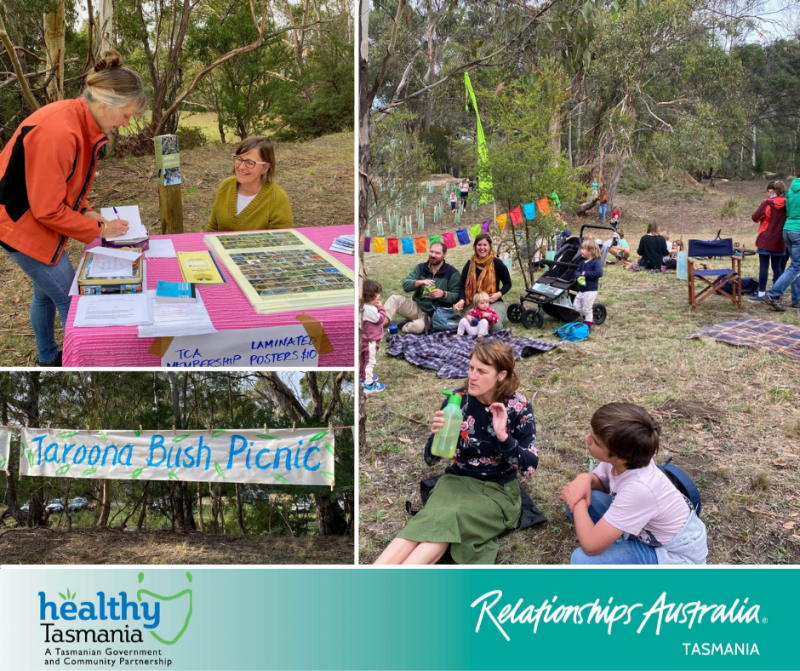 The first of Taroona Environment Network’s (TEN) three propagating sessions on 2 May was a huge success. People of all ages got involved with the event, combined with Taroona Community Association’s Bush Picnic, and was thoroughly enjoyed by many. TEN will be hosting two more propagating events in Spring 2021 – stay tuned! 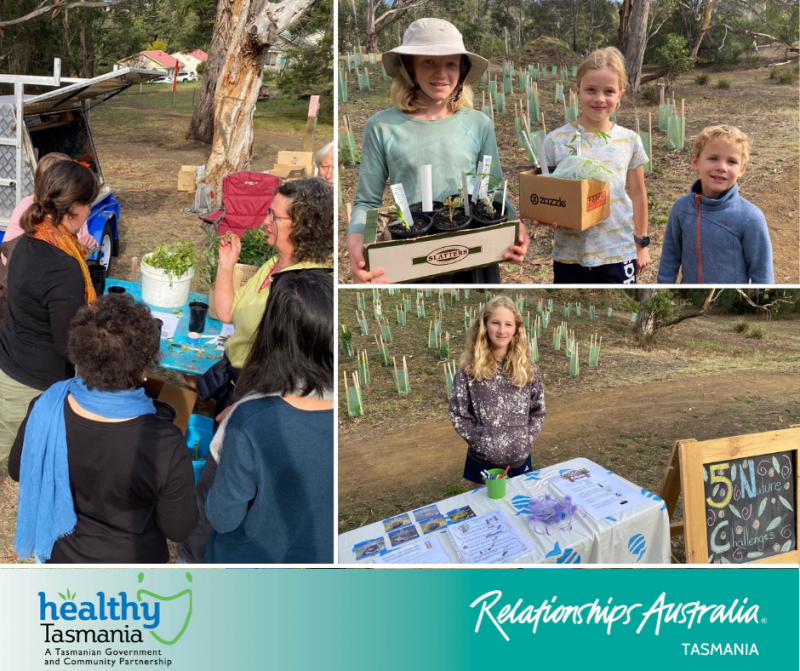 Close to 100 locals came to the Neighbour Day Easter egg hunt and sausage sizzle held by Wilmot Social Group. It was great for the Wilmot community to come together, socialise and get to know each other. The group used the rest of their grant to hold a community movie night in May – we’re so glad we could help get the community together! 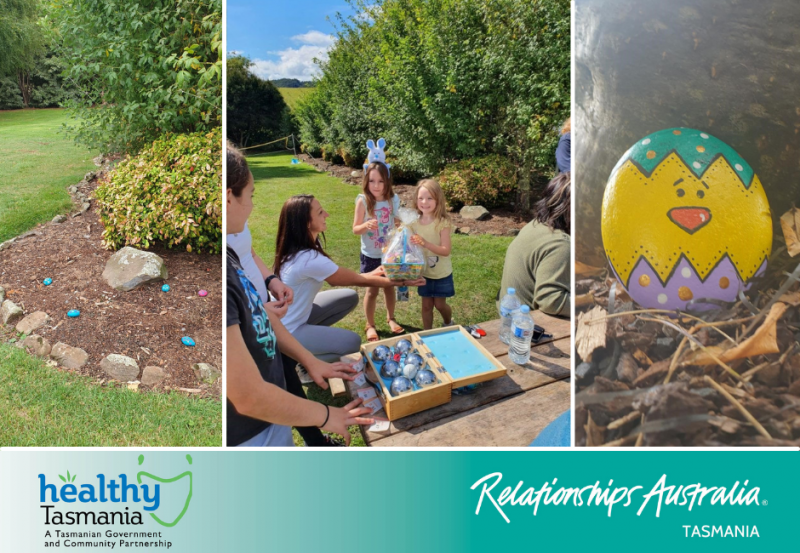 Youth Collective North East Coast Tasmania held a ‘Mad Hatter Tea Party’ event in June for young people and their parents/carers. The event was a huge success, with over 100 people attending. The event was well organised, with lots of healthy food options and a beautiful cake donated – no food was wasted! Flyers on hand helped attendees learn more about YCNECT initiatives and other youth initiatives in the area. YCNECT received a lot of positive feedback about the day from attendees. 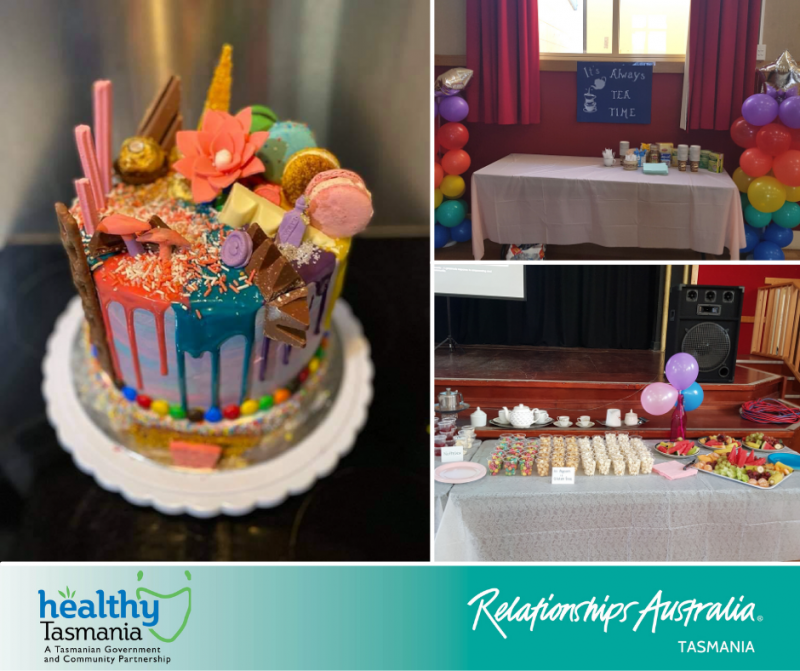 Your Church hosted a community festival on Easter Sunday. Due to the success of the event in bringing together the Moonah community, Your Church is thinking of making this an annual event. They hope the event can grow and become something that the community can look forward to and be a part of. 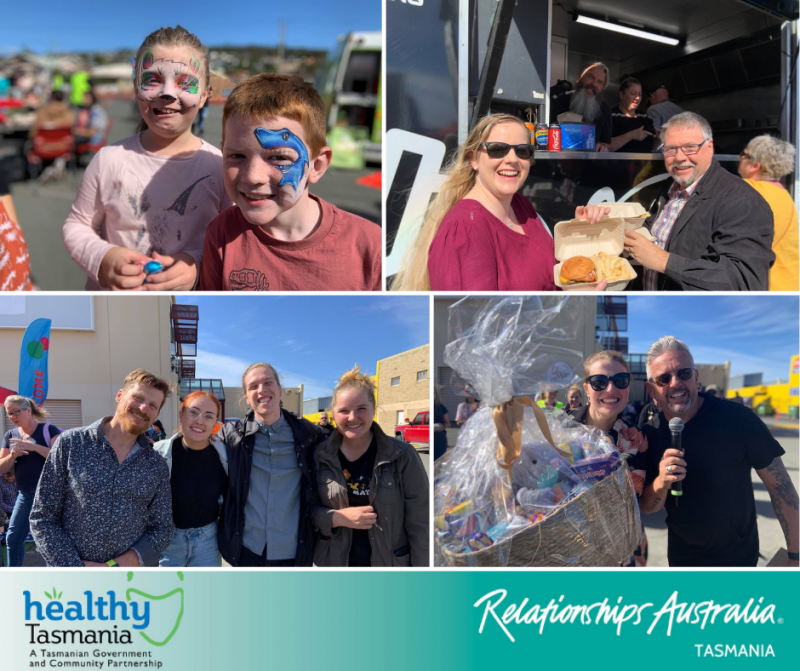