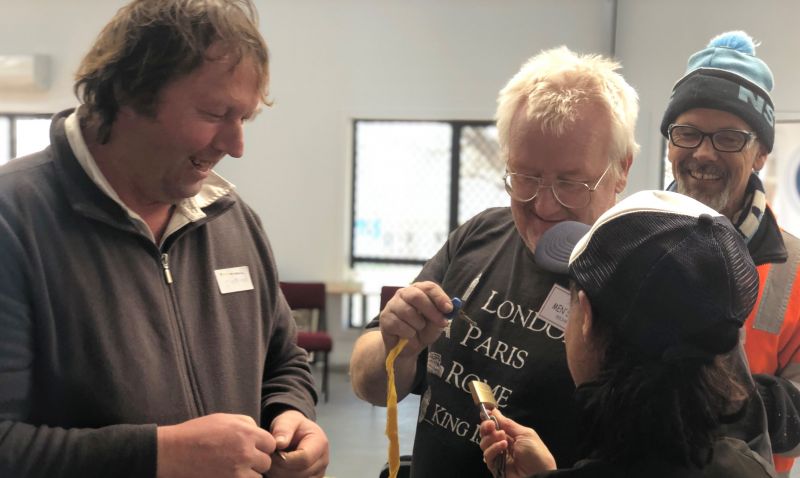 The Healthy Shed health and wellbeing program designed by the local community in the northern suburbs of Launceston has achieved significant and lasting results for local men.

Richard Bowerman, a local resident who was involved in designing the program along with a core group of men, said the Healthy Shed’s most significant success was that participants now understood how to access the resources available to them.

“When the doctor gives you medication, you don’t really know what they are talking about and you don’t know what to ask,” said Mr Bowerman, who attended nearly every session.

“Now we know how to get the right people to help, we have the networks and different organisations to access. Instead of sitting back and thinking ‘I can’t do this’, it’s about knowing there are answers out there.”

The Healthy Shed program was an innovative healthy lifestyle project built on the success of a pilot delivered at Ravenswood Men’s and Community Shed. It aimed to reach men in the Rocherlea community who had identified poor health literacy as a barrier to their health and wellbeing.

The 14-session program was co-designed with the community to deliver information on a broad range of health topics including medications, accessing support through the NDIS and pain management. A total of 45 participants attended sessions provided through multiple partnerships with community service providers, including Advocacy Tasmania and The Smith Family.

The men were free to drop in when they wanted, use gym equipment and chat to other men in their community. As well as information on understanding health conditions, they received financial and dietitian resources, hearing and blood pressure screening, and support to access services such as the NDIS.

Ninety-four respondents to a post-program survey reported they ate less junk food at the end of the program, 92% said their diet was healthier, and all participants agreed they were more confident and motivated to quit smoking in the next six months. Men also said their engagement with physical activity had increased and their mental health improved as a result of their participation in the program.

Denise Delphin, General Manager at the Northern Suburbs Community Centre, said these successes were largely due to the community’s sense of ownership in the program.

“It wasn’t about saying ‘this is what you need to do’, it was the reverse. The men had decided this was what they wanted to learn about and the changes they wanted to make in their lives. They attended and were consistent and open to learning about the supports they needed to make those changes,” she said.

Rocherlea is an isolated community that has high rates of unemployment, smoking, alcohol use and obesity. It has a significant proportion of people from refugee backgrounds, Aboriginal people and people with mental health conditions. Previously, health and wellbeing workshops had been provided as a once-off, rather than as an ongoing program designed to build participant confidence through shared learning experiences.

The sessions were run out of a new men’s shed built in 2018 in Rocherlea, servicing the local community as well as surrounding suburbs of Mayfield, Mowbray, Ravenswood, Waverley and Lilydale. With a workshop and a small gymnasium, the shed became a place for men to connect with each other and socialise. Many of these friendships have continued beyond the program.