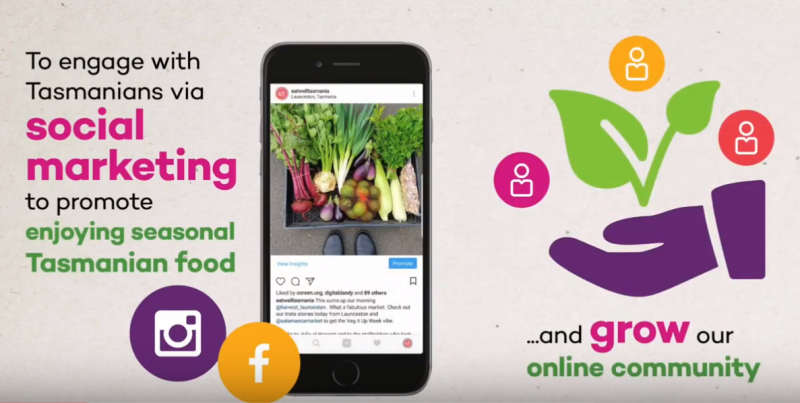 The Eat Well Tasmania Social Media Campaign explored the merits of using social channels as a way to ‘directly talk’ to Tasmanians about healthy seasonal eating.

Tasmanian’s high levels of social media usage (75 per cent compared with the national average of 59 per cent) made it an ideal platform to encourage seasonal and local fruit and vegetable consumption and to ensure Tasmanians are getting good evidence-based information about healthy seasonal eating in a food space which is often noisy and confusing.

During the 16-week campaign, as well as daily posting on both Facebook and Instagram, Eat Well Tasmania attended or delivered a series of events to create community activation around the campaign and generate new campaign content. This ensured a consistent narrative and shared real-life ways of encouraging Tasmanians to enjoy seasonal produce every day.

Throughout the campaign, through the events and other engagement partnerships were developed with a broad range of stakeholders, including retailers, markets and stallholders, local government, community organisations, growers, peak bodies (state and national) and their members, health promotion programs, tourism and other businesses.

Over the course of the campaign, digital engagement increased with Facebook likes up by 250 per cent and a reach increase of 400 per cent. The size of the Eat Well Tasmania online community grew by 33 per cent (Facebook) and 264 per cent (Instagram). The Campaign got its message in front of Tasmanians and visitors to Tasmania alike more than 800,000 times.

The results of the campaign are highlighted in a digital story, titled ‘Highlights of Healthy Innovation Grant Social Media Campaign 2018’